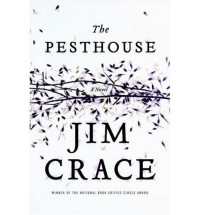 The Pesthouse is set in the distant future, though I'm not exactly sure how distant. America is a vast wilderness where Americans are infected with sickness and there is a lack of all modern conveniences, including medicines and electricity. People are emigrating from the interior to the east coast in hopes of catching a ship to take them somewhere better, although no one seems to know much about these places beyond the sea, only that things will be better there.

Margaret is infected with the "flux" and has been banished from her village, Ferrytown, to the pesthouse up on Butter Hill. She will be left there until she either dies of the flux or recovers enough to come back to the village on her own. Franklin is an emigrant, traveling to the east from his failed family farm with his older brother Jackson. He has become lame after many days of travel over rough country and finally talks Jackson into letting him rest in the woods above Ferrytown while Jackson goes on to see if he can get them some food and a spot on the ferry that will take them across the river.

Franklin discovers Margaret in the little sod house on the hill and is at first afraid of her illness. But life outside the pesthouse becomes uncomfortable with rain and cold finally driving him to seek shelter in the house with Margaret. The two are brought together after a natural disaster wipes out the town, including Margaret's family and Franklin's brother, Jackson. They decide to continue Franklin's journey to the east, both of them in search of a better life. Instead they find more trouble and hardship than they'd had before ever setting out. But they also find love and a new family, one to call their own.

I enjoyed this book very much and intend to read more by Jim Crace. The story had more to it than the standard post-apocalypse fare that I love. And while many times I get frustrated with an author who leaves to much unsaid, I think I enjoyed speculating on all the possible reasons for the condition that America was in and why people had adapted their lives in they way they had. I was especially intrigued by the Helpless Gentlemen and the Ark in Tidewater; that place creeped me out! Margaret and Franklin were entirely believable characters and their voices kept me reading and rooting for them to find happiness again. If you're looking for something a little more hopeful than McCarthy's The Road, try this one. It's a good read!
Tweet
2172 BOOKS